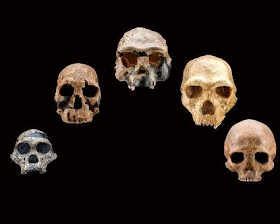 Muslim scholars down the ages have taught that the story of Adam and Eve literally happened just as described in the Qur'an. That Adam and Eve were real individuals and were the first human beings. Many Muslims use this literal understanding to reject the theory of evolution. But should we really take this story literally? I believe that to take it literally diminishes its underlying lesson and misses the point. It confines it to a simplistic story of two individuals. Whereas this story is actually an allegory of the evolution of human consciousness. It is a representation of the period in human evolution when we became self-aware, developed language & began think ahead & articulate abstract ideas. A time when our mind had developed the ability to represent concrete phenomena using sounds that represented ideas. We developed the ability to plan and organise ourselves on a scale that led to the human revolution. We evolved the abilities that set us aside from the rest of the animal kingdom. It triggered the rapid evolution of the human line of hominids that had until recently been no more significant than similar apes and creatures in the ancient forests and plains of Africa where we eventually set off to conquer the world.

In short, the story of Adam and Eve is about human evolution. It's about gaining the ability to visualise possible scenarios and prepare for them. This put us at a huge advantage over other animals who may have had greater strength and natural abilities than us. But we had evolved mental abilities they had not, and the mind proved to be the most powerful weapon of all.
This is what the story of Adam and Eve in the Qur'an symbolises when it relates how they were able to name phenomena in the physical world, while the rest of creation could not and the angels were astonished. Here we see a representation of how human's developed language and the ability to communicate complex ideas. Humanity had developed a special ability that set it apart from the rest of creation.

Humans became more than just conscious - since most animals are conscious to a certain extent - but we are also self-aware - as the story of how Adam and Eve symbolises when they became aware of their nakedness - something animals to not possess. Self-awareness is not only consciousness of your body and your environment, but it is recognition of that consciousness—not only understanding that you exist but further comprehending that you are aware of your existence. To be self-aware is to realise that you are a thinking being and to think about your thoughts, examine and analyse them. To conceptualise ideas and be motivated and driven by transcendental beliefs and ideals and concepts that can bind and direct humans on a larger scale than just family or family grouping.

When we think about when Adam & Eve were in the innocent state in paradise - there were animals in that state too. It was a time before we were self-aware. We were one with nature, with God - just as the animals, trees, flowers mountains and rivers are, in harmony with nature and the world around us.

But then as the story Adam & Eve progresses humanity begins to enter into a new state of being. Adam and Eve represent the waking conscious mind of mankind. When the conscious and subconscious become distinct, where inner joy and innocence and peace can no longer be maintained because now the ego starts to grow and take control. We become separate from the natural course, we "fall" or we become separated from God. The story represents this as expulsion from the paradise - the symbolic state we were in. It represents our move to a new consciousness. We are now more acutely aware of the pain and hardship of the world around us. Where we struggle to find sense and meaning and ask; Why? Who? What?

As the story goes on Adam & Eve are tempted by Satan who is simply a metaphor for man's own "Ego". The Nasf al Amaara bisoo' ("The self that makes us err" النفس الأمارة بالسوء ), and because the Ego now takes over the driver’s seat of man’s soul, Paradise becomes lost.

Our new reality is one of constant battle with our Ego. We are thrust into an ongoing struggle to find our place in the world, to reach out to the the ethereal and the numinous mystery beyond our material existence, to find the inner peace and joy that our previous state of innocence and unity with the natural world gave us, while at the same time mastering the special gifts and position of Khalifa (caretaker) that we have been given, to care for the environment around us.

Understanding that stories like Adam & Eve are symbolic metaphors for our human journey helps us realise that it is part of the wider human narrative that takes place in all cultures and religions. The narrative we use to understand and make sense of our place in this world. It should help us see that we are all "One Human Race." That although we interpret this journey in different ways depending on our cultures and environments there is nevertheless a thread of unity of our human experience that runs through all religions, beliefs, myths and philosophies. That differences are skin deep and superficial. That petty squabbling and fighting over such differences is senseless and short-sighted. We are like the blind wise-men who each described the elephant based on the only part they had access to, then argued fiercely that the others were wrong. If we can appreciate this, then perhaps we can one day take another evolutionary leap forward and start to build a better more peaceful and loving world for us all.
Hassan Radwan at 15:40
Share